The Center for an Independent and Sustainable Democracy 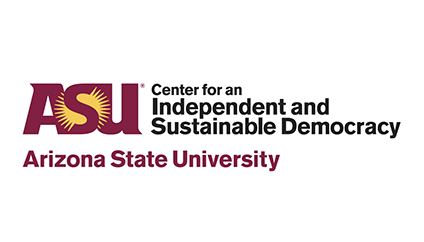 The Center for an Independent and Sustainable Democracy at Arizona State University aims to foster and support thoughtful, innovative research, policy briefs and forums around the state of American Democracy. The two-fold focus is on exploring nonpartisan reforms and redesigns of federal, state and local governance of electoral structures, and a deep dive examination of the independent voter.

CISD has recently released two important studies on nonpartisan governance and the independent voter: Election Administration In America – Partisan by Design and Social Networks of Independents and Partisans: Are independents a moderating force?

In the report, Election Administration In America – Partisan by Design, Open Primaries and the CISD reviewed the electoral codes of states with partisan voter registration systems. You might imagine that if you were to read through the electoral code of any particular state, you would find a dry recitation of rules for how elections should be conducted to ensure a fair and impartial outcome. You would be wrong. Rather, the electoral code of every state is ripe with rules for how the two major parties-Republican and Democrat-prioritize their power at the exclusion of everyone else. Nonpartisan election administration is the norm in most western democracies.  This is not the case in America. The United States is the only democracy in the world that permits partisan contests for election officials. In other democracies, elections are run by independent commissions or governmental agencies shielded from political influence.

While scholars have long recognized that social networks impact political engagement for partisans, comparatively little work has examined the role of networks for independent voters. In the recently published article, Social Networks of Independents and Partisans, CISD contributes to existing research on social networks and politics by surveying Arizona registered voters about their political persuasion, personal networks, and media consumption habits. Our findings show that independents have networks that are structurally different from partisans. Specifically, we found that both Democrat and Republican respondents were more likely to frequently talk about politics with independents than with members of the opposing party. Independents were also less likely than partisans to end a friendship over a political dispute. Taken together these findings show that independents may be frequent and reliable discussion partners for partisans and may be able moderate political views. We find evidence for the moderating force of independents is especially apparent in the media consumption habits of Republican respondents. Follow the discussion on Twitter:  Altmetric – Social networks of independents and partisans: Are independents a moderating force?

Use the Research tab for more cutting-edge research by CISD.