It’s been a turbulent 2020, with a pandemic, continuing social unrest and an economic recession. How to make sense of it all?

Colleen Wessel-McCoy, a specialist in Christian ethics, is joining the faculty at Arizona State University this month, where she will teach a fall course titled, “Responding to COVID-19: Religion, Policy and Social Change.”

“I’ve been really interested in how religion has always been very much about social change, and understanding the relationship between religion and how we are in a community and as a society,” she said. 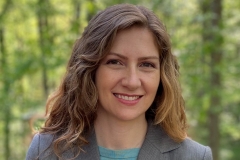 Colleen Wessel-McCoy is the Neely Visiting Professor of Religion and Public Policy at ASU.

Wessel-McCoy is the first Neely Visiting Professor of Religion and Public Policy at ASU, a position underwritten by the Episcopal Diocese of Arizona, thanks to a grant from the CW & Modene Neely Charitable Foundation. The one-year professorship, which will include interaction with the community, is in the School of Public Affairs.

“1968 was also a really turbulent year,” she said. “There were high-profile assassinations and global uprisings and it was a really heated election year.

Question: How did you become a Christian ethicist?

Answer: I grew up as a practicing Christian and so that’s always been important to me, but it’s become the academic side as well. Alongside the study of it, I’ve always been someone who’s involved in social change work and community organization. And I’m really interested in the religious leadership of organization and change work. How is it that folks are motivated by morals and values from many different faith traditions?

Academically, I look at the relationship of Christianity to how people engage in their communities and their vision for society and social change.

I grew up in Georgia and I was a community organizer in Chicago in between college and grad school. I worked for a tenant organization that had a thousand units of housing. I organized tenants around issues that impacted their lives, including things like police violence in the neighborhood. The buildings were in a gentrifying neighborhood so there was a lot of pressure on the police to have people behave in the streets in a particular way.

People hanging around outside often drew attention from the police so I worked with tenants on building better relations with the sergeant who oversaw that neighborhood and on a more efficient way to file complaints when they were being harassed, and to share stories with each other.

We organized for greater access to employment opportunities in the neighborhood and an increase in affordable housing.

Q: Why is having a position in Christian ethics important?

A: When I applied for the position, we were already living in a time of great inequality and social turbulence, and over the last few months, that has reached a height that is unprecedented in my lifetime.

I was already thinking about the role of morals and values and religious beliefs. Even among people who are not coming from a religious tradition, it’s very much still present in the world around us. It’s trying to think about how others are motivated and understanding how people operate in the world. For people who come from a religious practice or religious tradition, the academic study of religion and ethics helps people to relate to others who maybe have a different religious perspective or tradition.

Looking at it in an academic way, at these questions that for many are deeply personal, is an important part of having an education that contributes to your vocation. We are in a world where so many people have religious ideals and values and being able to think about those questions enhances everyone’s vocation or career. Everyone can have an understanding of how people are motivated by religion.

Q: You’ll be teaching a class called “Responding to COVID-19” this fall. What will you cover?

A: When the class went into the catalog, it was on COVID and the economic crisis as two related crises playing out.

Since then, the uprisings around police violence have also come into the mix as a related social crisis. We’ll be looking at that and the relationship among the three.

History gives us tools for analysis. Then we’ll be turning to something that’s pretty new. We’ll look at the current situation with COVID-19 and the economic situation and then what policies have been put into place. Many have been enacted quite quickly. How did different religious institutions advocate or shift or attempt to influence those policies?

Q: What are you hoping to accomplish at ASU?

A: I’m excited that the position includes building relationships between religious congregations and the School of Public Affairs. There’s going to be a real interest and hunger in that. People are interested in going beyond the headlines in the newspaper and to learn from what the college has to offer in terms of analysis, contemporary and historic.

I’m also excited to bring speakers from outside for students to learn from people across the country. There’s going to be a number of guest speakers who are religious practitioners and social change agents speaking to the class and hopefully be able to do more of that beyond class.

I’m really excited for the space to continue to do research.

One of the main projects I was involved with right before ASU is called the Poor People’s Campaign, a national campaign that includes some work in Arizona. I’m excited to be connecting there.

The Poor People's Campaign is a national campaign that really brings together religious leaders from various faith traditions and has its own policy platform. It’s a case study that I think will be interesting for students to engage with and another way of being involved in Phoenix and seeing the relationship between social change and values and morals and religious beliefs.