ASU supports veterans as they compete for prestigious fellowships

Angel Orozco is already devoted to service by being a member of the Arizona Army National Guard. He would like to continue with a career in service, and the Arizona State University student is getting support in pursuing that.

Orozco is competing for two fellowships that would pay for his graduate education and give him a head start on a career path. And ASU’s Lorraine W. Frank Office of National Scholarship Advisement has been an enormous help in the rigorous application process.

“I joined the Arizona Army National Guard because it was something I always wanted to do and I always had an interest in service,” said Orozco, who is pursuing two degrees at ASU — business with a focus in global politics, plus civic and economic thought and leadership.

Orozco recently found out he is a finalist for the Thomas R. Pickering Foreign Affairs Fellowship Program and the Charles B. Rangel International Affairs Program, both of which would pay for graduate school and require a five-year commitment to the State Department.

“Being in the foreign service would be serving in a new way, and it would be exciting to travel the world and try to make a difference in people’s lives,” he said, adding that his wife is fully supportive of moving abroad.

Although the fellowships are prestigious, the practical aspect is appealing as well.

“I was poor growing up, and I know there’s really no way for me to pay for my education on my own and that’s where these prestigious scholarships come in,” he said.

“If I can put in the work and make it happen, I can go on to do cool things, but I can’t do it alone.”

That’s where the Office of National Scholarship Advisement comes in. The office not only helps any ASU student find scholarships and fellowships that are the right fit, the staff also provides workshops and personal support with interviewing and writing the application essays.

Kyle Mox, associate dean for national scholarship advisement at ASU, said that student-veterans don’t necessarily think about applying for international fellowships, but many of the awards favor applicants from the military community.

“Often they’re older, or have families, so dropping everything and going abroad for a year is not as feasible for them,” Mox said. “They may be pretty focused on, ‘I’m going to get this degree and get a job.’”

Mox hopes veterans keep an open mind about the possibilities.

“They might say 'no' before we’ve had the conversation,” he said.

Many programs have a strong preference for veterans, such as Fulbright, Gilman and the Boren scholarships for critical language studies, which is a Department of Defense program, he said.

“There’s a disconnect because a veteran might think, ‘I’m not a 4.0 student or a captain of a club. I’m not what they’re looking for.’ When in reality, a lot of fellowships are looking for that leadership.”

John Ransone had gone to college for a while before joining the Army, where he served in the intelligence field for eight years. 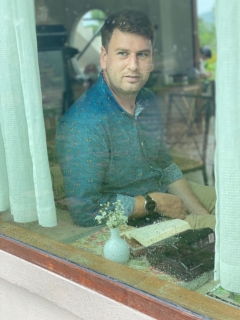 ASU graduate John Ransone won a fellowship to travel to Bangkok to learn Thai. He would like a career fighting human rights abuses in Southeast Asia.

“A lot of it dealt with Southeast Asia, planning and coordinating humanitarian assistance,” he said of his service time.

When he got out, he came to ASU and majored in Asia studies. In spring 2020, he won a Boren Award for International Study.

“I had no clue about Asia prior to working in the Army, and what I did know was a lot of stereotypes and misconceptions,” he said.

“Working there and meeting people was a big life change and a change in my worldview.”

Ransone said that the Office of National Scholarship Advisement did a panel interview with him to prepare him for the Boren process.

“They go over your application and help you refine and improve your essay for the national submission,” he said.

“Professors from different disciplines look at the totality of your essay and proposals and then basically grill you on it and see if you know what you’re talking about and make sure that you’re a good candidate for the program.”

Ransone won a Boren to study in Thailand, but unfortunately, it was at the beginning of the pandemic. His departure was delayed by several months, and he had to scramble to make new arrangements. He ended up spending six months in Bangkok earlier this year, when the city was emptied of tourists, and the language program wasn’t as advanced as he hoped.

“I had two years of Thai experience, and the program was at a level below where I was,” said Ransone, who graduated from ASU after he returned from Thailand. He is now pursuing a master’s degree in Asian languages and cultures at the University of Wisconsin.

“But also just working with my friends and people I met there helped me a lot with my Thai. My conversational Thai is pretty good now, and I’ve gotten better at reading.”

Army veteran Cristian Payan is applying for a Fulbright award to teach English in Mexico. After his five and a half years of service in the Army, he earned three degrees at ASU — two bachelor’s, in public policy and marketing, and a master’s of legal studies. He’s now working for a technology consulting firm in Washington, D.C., but would like to get back into public service, working for the State Department. 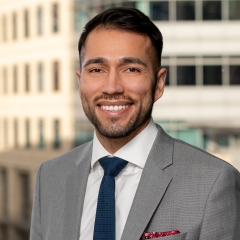 Cristian Payan is pursuing a Fulbright award to teach English in Mexico and has received support from the Office of National Scholarship Advisement.

“I had heard of the Fulbright, but wasn’t sure it was for me,” Payan said. “I’ve never heard of people from my backing getting this. But Kyle said, ‘I think you can do this,’ and he’s been guiding me.”

The Office of National Scholarship Advisement gave him the confidence to pursue the award, he said.

“I joined the military because I needed a foundation to grow as a person,” he said. “In the Army, I had way more responsibility than other 18-year-olds. ONSA and Dr. Mox guided me to articulate those skills in a way that comes across in the application.”

Payan says that teaching as a Fulbright fellow would be another form of community service, which is his passion.

“I love helping the Latino community, and one of the best ways to do that is to go to Mexico and help those in rural areas learn English,” he said.

“It’s not only a way to empower individuals, but also the community, which will have a lasting effect.”

Payan won’t find out whether he’s gotten the Fulbright award until January.

While many of the fellowships have a preference for veterans, the awards are still extremely competitive. Orozco made it to the final round of the Truman Scholarship competition earlier this year but did not get the award.

“It was a lot of hard work, and there’s a tiny chance you get it,” he said. “But Dr. Mox has taken a strong role in ensuring that ASU students are competitive on a national scale.”

With the help of the Office of National Scholarship Advisement, Orozco was able to winnow the first draft of his current fellowship application essay from 7,000 to 300 words.

“You get very invested in the process,” he said. “This will determine the next seven years of my life.”

Top image: Angel Orozco, an ASU student and member of the Arizona Army National Guard, is pursuing a prestigious scholarship to attend graduate school and begin a career path in the State Department. The Lorraine W. Frank Office of National Scholarship Advisement is supporting Orozco with his application, essays and interview process. Photo by Deanna Dent/ASU News